Keep Calm and Drone On 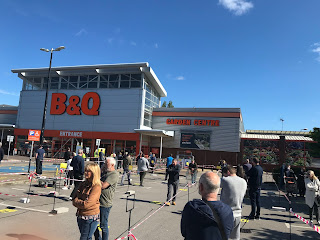 Last Thursday a new pandemic low so far as I was concerned. Thereafter I discover that my sheet-metal supplier had re-opened for business during the same week, and the same for my alloy extrusion wholesaler. First time I'd been beyond the garden gate and legally dubious, but live fast and die old, I say.

And joy of joys, this week Britain's favourite DIY store has reopened for a form of business. It's long been my own favourite hardware mega-store when it comes to prototyping and I am glad to contribute to their revival. It's looking like we're over the worst of it, which is no consolation if you've personally succumbed to the pandemic, but there comes a point to when the body politic has also to be sustained for the longer term.
at April 28, 2020 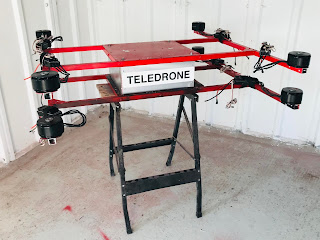 There are countless dead-ends in development, and this is destined to be another. The plan being that if it could be got to fly, then the centre-body could readily be swapped out for the phone-box and mannekin ~ the reason in turn being that at this stage the two drones need to be hard-wired.

The eventual aim is to use two wholly independent drones top and bottom, with the payload sandwiched in between. In the near term though the upper drone will control the lower and this itself is possible because their is sufficient length in the wiring connecting the ESCs (or electronic speed controllers) for them to be commanded from a flight controller fixed above the upper drone. Meanwhile separate battery-packs would service the upper and lower set of motors so as to reduce the wiring loom.

In effect this could be though of as the brain up top, connected to the lower limbs by a form of nervous system... whereas in the long run we want something like a starling murmuration in which the lower drone works independently whilst in concert with the other.

After all that however I have formulated a better means of incorporating the phone-box with the two drones, and I shall therefore re-cycle the above in accordance with that plan. This is nothing new though, as the many iterations have been re-cycled endlessly as a way to evolve the most practical means possible of raising a body by electrical means. 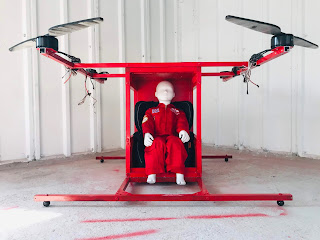 With lockdown in the UK scheduled for another two-and-a-half weeks at least, I am as bored with diarising the fact as I am with the government's lack of preparedness... the response to any crisis in the UK invariably being a rallying-cry to save property-owners in London, along with their bankers.

To suit reduced circumstances however I have down-sized the prototype with a view to flight testing, and the foot-print (discounting the propellers) is exactly your feet square. The box itself remains a foot-and-a-half square although it is reduced to two feet in height, as it may were it to accommodate someone of around four feet in height themselves, which is what I figure the mannekin to be without being able to take the measurement.

One decision I make today as that it is not, after all, worth flying the prototype 'as is' with just four motors up top, as we've done that already albeit under a different arrangement. It therefore behoves me to fit a pair of skids as per the registered design, and to get it wired up with all eight motors as illustrated i.e. with four up top and four down below.

Only this way ~ reflecting an apparently unique configuration in the world of drones ~ are we likely to prove anything much at all, and not least the notion that one day it might safely fly pilots from A to B.

This leaves me two propellers short, however, they being casualties of the trip to California. 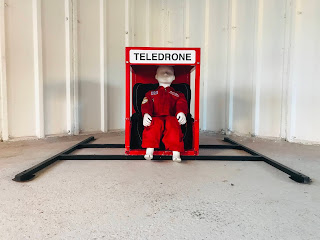 Desperate times call for desperate measures and I need to make the prototype as portable and practical as possible. Toward this effort I reduce the size of the passenger compartment by eliminating the 'booster' shelf and sitting the dummy ~ as indeed I shall be sat ~ directly upon the floor of the phone-box.

All of this only possible because I have been able to source pop-rivets online for collection, without which these modifications would not have been possible. The most sophisticated of aircraft in the form of Boeing's 'Dreamliner' suffered early in its career from precisely the same problem viz. a shortage of rivets ~ back then though as a consequence of excessive zeal toward 'just-in-time' means of manufacture.

Same afternoon too the castor-wheels turn up, and fitting them to that pair of skids a job for tomorrow, Rome not having been built in a day as the milkman I once worked alongside was oft to say. 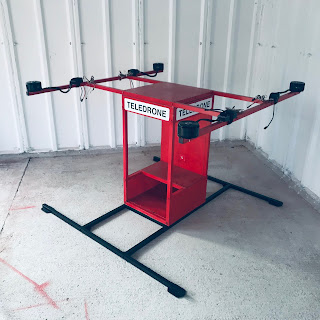 With it being the Easter weekend but no end in sight for the lockdown, with the best part of a thousand deaths a day in the UK from the pandemic, I'm going to have to work with what I've got. For instance, the radio transmitter of choice ~ the Taranis X-Lite from China ~ is out of stock everywhere due restricted supplies, so it is going to be a question of begging, stealing or borrowing (and most likely the latter).

I shall therefore pursue the reconstruction of the working prototype in the form of a quad, which at least means that I've an abundance of spare motors, propellers and electrical speed controllers. In this vein the lower module becomes the undercarriage, for which I already ordered as set of castors yesterday as an alternative to skids.

Accordingly to I paint the base matt black instead of Post Office red, in accordance with the design (by Bruce Martin, a fan of modular construction) from which I drew the inspiration: 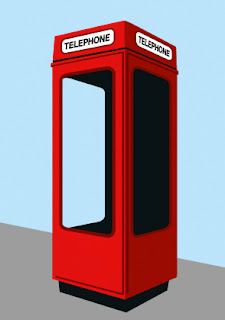 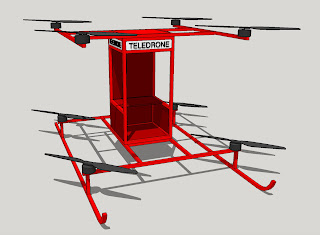 I register the above as a design, and I might as well flaunt it for a few days while things are quiet build-wise, not least because everything in the way of tooling and materials has to be ordered online in view of the national Coronaviral lockdown.

From hereon in it has to serve as something of a talisman and the basis of all flight-testing going forward. I debated the colour, having initially (as can be seen from the 2/3rd scale proof-of-concept below) gone for matt black for elements below the phone-box.

I did this because the original K8 phone kiosk on which it was loosely based stood upon a black cast-iron base. Nobody would ever notice the fact however unless it was pointed out to them, and thus it seems pointless to use it here.

Beside that, the interaction with junior members of the public at the NASA Ames event at the end of February showed that the superstructure of the undercarriage is invariably a trip hazard, and thus ideally rendered as conspicuous as possible.

Apologies for a lack of posts over the past few days, while I took a break in the fine weather to do the back garden. Churchill did the same at times of national crisis as a diversion (and he an accomplished bricklayer), and I don't see why I shouldn't... 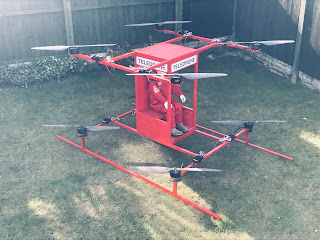 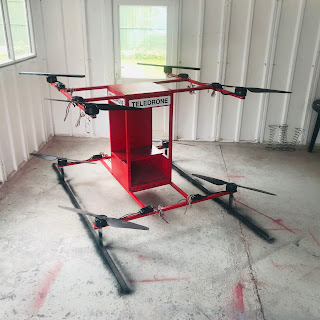 After much head-scratching and ceiling-staring yesternight, I see clearly how these lower propellers are to be physically protected and skids fitted, and I do so by swinging the lower quad through ninety-degrees. This provides a suitable mount for the sort of skids sported by the original 'MASH' Bell-47s, a helicopter that for many of us was our 'first love'...
at April 03, 2020

Struggle for much of the day with my diminishing supplies of alloy and a pop-riveter that needs replacing inside the week. I construct and re-construct a couple of variations on the configuration of the two drones around the frame, seemingly unable to pitch the lower set of props where I want them without either adequate protection for either their blades or else the passenger. During the evening though I've a eureka moment: shall add a wholly separate undercarriage module that supports a pair of skids that underpin the lower set of motors and the longitudinal extent of their blades. Have already decided that one way or another for the take-off and landing phase these propellers can be stowed so as to benefit from this form of protection... 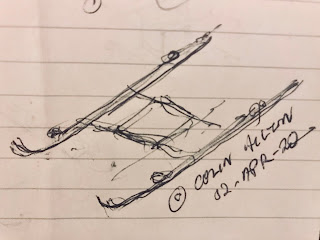 This is truly hopeless.

I consider any number of alternatives by way of suspension and undercarriage, which costs me not a little on eBay and Amazon, to little effect. I believe Edison trialed over 600 forms of filament before landing upon tungsten ~ or its equivalent back then ~ and this is the tragedy of reverse engineering... the product that is eventually copied represents the tip of an iceberg of both spending and effort.

As a consequence I ditch the idea of sprung undercarriage altogether, except for the inherent elasticity included in whichever structure I settle upon. This was a path worn by Volocopter, whose original prototype landed upon a gym ball set at its centre before ditching this in the institutionally-funded prototype that sports a conventional set of skids.

What I resolve upon instead is using the self-same module that forms the upper and lower drones to form the basis of a separate undercarriage fixed to the base. As a consequence I need to relocate the lower drone and to do so I shall remove the centre-body and slide it up the 'phone-booth' so as to support it like a traditional litter, or sedan chair. While I am at it therefore I might as well do the same with the upper quad.

It is something I did consider at the outset of re-designing the airframe subsequent to visiting California, although I abandoned it for a more modular design with separate units viz. pair of drones and passenger compartment that can be disassembled. The route I am taking now really calls for a prototype that remains fully assembled, which in turn will mean it has to be transported intact and that will likely involve a trailer.

The benefit is that the structural space-frame is simplified and is therefore both lighter and stronger, which are perennial requirements in aviation. The art of design is ever one of compromise, like life itself.

Sadly I snap both of my remaining 4 mm drill bits in short order, with no replacements to hand any more now that retail outlets beyond food are invariably locked down, and the mail is patchy. I'm having to substitute for the lack of bolts by using the threaded rods that I have left along with nuts that fit. In other words I am practically having to fabricate my own bolts.

Sobering how much we depend upon each other for all else except sitting around to worship our various gods. And even that depended as often as not upon taxes and charitable giving.

Nonetheless after a cup of tea and an Eccles cake and a moment of self-doubt, I've a solution. Realise am trying to run before I can walk. Shall therefore configure the uppermost module with the quadcopter and the lowermost with a set of skids, simple as. This 'lunar-lander' will be equipped with feet in the shape of ~ literally ~ frisbees. And happily they come in black, the sort they'd be using on the beach in an Ingmar Bergman film. And beside all this I've finally got visualisations of the thing without endless iterations  in the workshop, courtesy of my cousin (airline captain and one-time architect). Things are looking up... 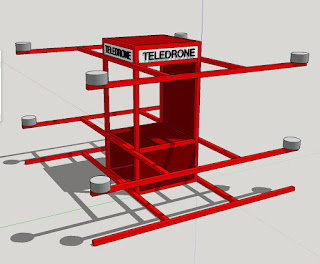