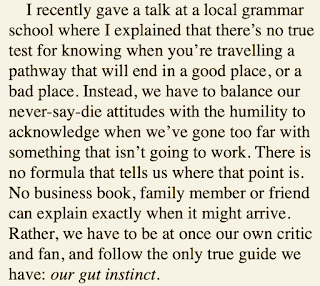 That's Richard Browning, inventor of the jet-suit and founder of Gravity Industries, and from the book. Caught on the horns of a dilemma, for age fifteen he lost his father to suicide; his father having run out of road developing an invention of his own, for which he'd given up his day-job as an aeronautical engineer. I can identify with each, success with any idea being a roll of the dice.
Browning said he'd most often been asked "What for?" by people after revealing he'd made an 'Iron Man' flying machine. But in truth, it's the question that's asked of every advance that humanity ever makes. As a stand-up comic in London once said, you can be sure when we started cooking meat that people would have said, "What... cold food not good enough for you?".
at September 11, 2021 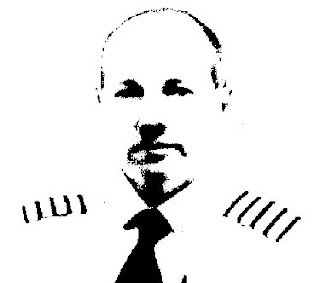 Posted most of the video content accumulated over many months on the channel at:

It'll either 'encourager les autres' or put them off trying altogether... 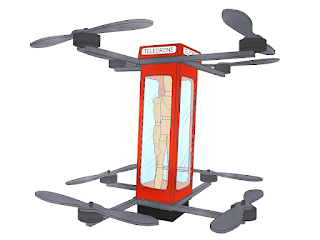 Re-hashed the website around the intended proof-of-concept, which itself represents a welcome return to the project's roots. Clearing your browser's history has combined advantages in that beside erasing all record of your visits to the nether ~ besides that held on permanent file at GCHQ ~ it keeps you up to date with the author's efforts at death by self-defenestration:
www.teledrone.com
at September 04, 2021 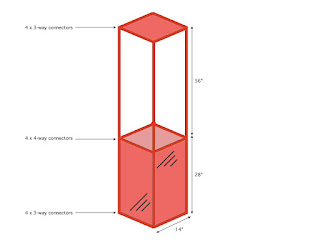 Limited in what I can do here, but after yesterday's excitement it's nice to turn to less contentious matters, isn't it? Here's my take on how the middle of the airframe is set to look, and tailored to my own proportions. Like building your own coffin for standing up in, and it's doing these things makes you realise why they're the shape they are.
at September 03, 2021 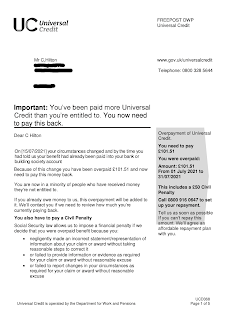 Redacted to protect the innocent, correspondence arriving via notification in the form of email, which advises me to open an online case file relating to Universal Credit (not sufficiently universal however to stretch to correspondence abroad).
With my legal hat on, I would query the lack of date... something every child is taught to begin a letter with whilst at primary school (beside the punctuation in the opening line). Interestingly though it's digital communication so as to reduce headcount, which in turn increased the potential for fraud, the parlay is somewhat one-way. The journal itself that comprise the case file is closed for communication, as are email and text message.
There is the opportunity to phone (by yesterday's deadline), or to post a letter within the UK, a place that has effectively closed to its own citizens who find themselves in a proscribed country on its pandemic 'red-list'. Alternatively there is the facility to make a conventional international phone call, cost of which they won't be refunding.
They are however in error, and despite the threats and insinuations I am altogether in a position to defend myself in court. The last (and only) time I had reason to a query a decision of this kind involved a tribunal at a court in Liverpool on a date when I was otherwise disposed: having flown from there to Tokyo at my expense in pursuit of a job. Naturally on the occasion I lost the case, but bear in mind you and I are paying for these people in wigs to sit in judgement upon farce of this kind.
Although most people are intimidated by court surroundings, I'd relish the chance to expose the theatre of the absurd that is a DWP fashioned in public schoolboys' image, not least that of Dominic Cummings (one time adviser to fellow public schoolboys in the shape of the PM and Michael Gove). On the few days I was sick from school, I'd sit in bed watching episodes of Crown Court and hoping one day to be a barrister.
I never got to those Inns of Court, but I have won the only two cases I've been involved with, beside supplying witness testimony against a couple of repeat offenders I'd seen walk away from a building site with a power tool. Had I known the foreman couldn't give a fuck either, however, I wish I hadn't bothered. Actually I don't, it being an education in itself.
Plus a mess ~ read Fake Law by the anonymous barrister in London. The one thing that amazed me beside the realisation that the CPS were effectively failed lawyers, was how the people you were about to accuse in court on behalf of the prosecution were sat there opposite me in the ante-room. Not like I'd been raped even, but merely suffered damage to my Vauxhall Cavalier.
The case file as I peruse it is peppered with procedural and factual errors, and I look forward to donning my own powdered wig and entering court with a flourish and one of ethos rolled up folios with a red ribbon. I'm disputatious, contentious, floating like a butterfly around the dock and stinging like a witty bee.
And you're all invited. I shall bring the drone as exhibit Number One and upon which I have spent £18,000 in the last year alone, and sit back twiddling that silly black tie as those arraigning me endeavour to prove that I'm a n'ere-do-well without any intention in life beside defrauding HM government... as if the banks themselves and politicians were incapable.
News this same day that Afghans fleeing the monumental fuck-up the establishment made of that country (and any other not aligned with our morally-superior beliefs and lifestyles) are entitled to welfare. Born in the UK and married ten years to a Turk, ironic that she is not entitled to any form of welfare whilst the pittance afforded me they hope to reclaim.
All claimants though must use my approved communication means of communication.
Carrier pigeon.
at September 02, 2021

This Time Next Year, Rod... 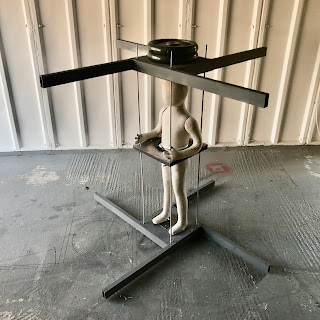 Before my wings were clipped by the 2.60 metre dimension set by the GoFly challenge rules, there was no hell below us and above us only drones. And we'll be revisiting this one in the new-build. Having established the layout of the lower end, we've now to build upward as we reach for the sky.
This little chap, Rod, is a metre tall and one thing I discovered just over two years ago when this was taken was that with columns passed through a flight-control 'console', the box containing the operator can be reduced in height to around the 16" mark too.
Those are 5mm threaded rods as I recall, and over twenty kilos up top... not a weight they would have supported without a brace of this sort. The device slides, too, but so what? Well since then I've looked at quite how to squeeze myself in from every angle, and lower limbs being smaller in outline than my waist, we can reduce the footprint of the centre-section of the base to suit.
The box at foot-level will therefore fulfil three principal functions: it will protect the shins from blade-strike, root the superstructure and remind people that one day, a phone-box might yet fly.
at September 01, 2021