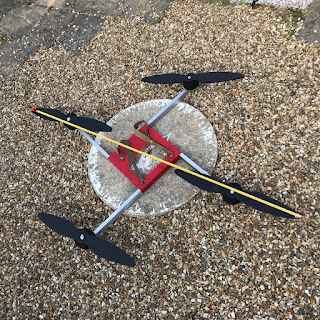 Pleased with the days work... the 18-inch frame seen fitted here with 36-inch propellers, ample rule for a bit of armour around my bod and that's 8 feet 5 inches across the tips (or an inch inside the GoFly guidelines).

I actually still like the props mounted up top too, not so much because the motors need the cooling (but then every little helps when you hit TOGA thrust) but because you can scope the tips altogether more easily.

An advantage of eVTOLs over helis is the fact you can get up close and personal, and I figure with white tips and LEDs you can place those propellers within a smidgeon of obstacles.
at April 08, 2019

A (Navigation) Bridge Too Far 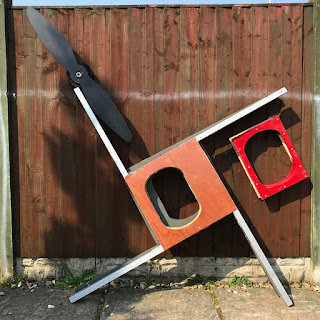 The 12 x 14-in deck at right proves a 'bridge too far' when it comes to ergonomics, hence:

(a) 18-in (ply) version an ideal balance between protection, weight and propeller-clearance.

(b)  square outline better than rectangular (which required two spars to be foreshortened).

(c) the operator's cut-out is better set back to provide adequate margin for manual controls.

The latter will pitch the C of G rearwards and to compensate I shall ballast with fixed battery-packs plus a swing-seat that will pitch the operator's legs forward and hopefully centre the trim for the cruise.

The picture shows the 18-in ply outline overlaying the 20-in alloy version ~ which must now be modified to suit ~ while the smallest embodiment appears at right minus its rotor-arms.

The dummy propeller parked at the end of one of the (39-in) rotor-arms measures 36-in to suit the one selected for the prototype.

The cut-out is enlarged to 14-in wide and 10-in deep, hopefully providing investors a chance to squeeze in themselves in order to get the 'look and feel'.

I've sat in myriad cockpits during a long life, and frankly this one's up there with them if only for its novelty.
at April 08, 2019 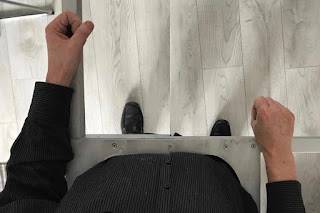 There are times during development when you're at a crossroads, and having reduced the chassis yesterday to just twelve inches by sixteen, I am decidedly unsure about which way to proceed.

I could stand on the same outline holding on to a form of Zimmer frame, but although this is a common approach to eVTOL I don't think it's the optimum. From a general point of view it is the very least stable in aerodynamic terms and wholly reliant on either a very acute sense of balance or else computer stabilisation.

An airline instructor told me once how a colleague found himself flying an F-16 without the necessary flight control computers. Bearing in mind such aircraft are inherently unstable to improve manoeuvrability, he was delighted to have been able to control it for as long as he did prior to ejecting.

I also consider the layout at foot-level augmented by another at waist-height to compensate; or even wearing it like a yoke with a crash-helmet protruding and hands hanging from holds.

None of it feels nearly as comfortable as hanging the thing around my midriff ~ a location with the benefit that the centres of lift and thrust would appear to be ideally aligned.

In the event reducing the foot-print proves to be a net gain with two lessons learned:

In other words the left-most spar is ideally placed to support a side-stick whilst that at ninety degrees to it can be used to mount a thrust-lever (or collective, to the rotor-heads among us). I find that the former works about 45cm forward of the rear spar and the latter at around 35cm, incidentally.

You can of course simply invert the chassis in order to reverse this arrangement, particularly in view of the fact that helicopters are steered with the right hand.

Nonetheless I have only ever flown an Airbus as commander and it therefore would feel only natural to me to guide the vehicle with my left hand ~ indeed any Airbus captain will tell you that adapting to a side-stick at all, and in the 'wrong' hand too, was easier than anticipated.

The photo is a montage because I'd lost the selfie-stick. And ignore the beer-gut if you would, please?
at April 05, 2019

Slim Air of the Year 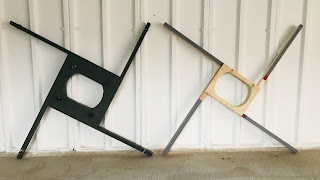 It's clear from the Phase Two awards that I can count in months what the competition have expended in years on their own eVTOL projects, but then I doubt anyone else can construct an airframe in an hour or two... whether the real deal in alloy like the one on the left or else a mockup in timber off-cuts like that one on the right, which in practical terms differs little.

Fact is I'm up against well-financed teams with ample facilities, reserves of cash from lives well led and who don't need to idle a Suzuki Jimny to keep the place warm. In contrast I've a garage and a tool-box available to me, but as we're not trying to split the atom I figure that's enough (although admittedly my electrical contractor has a barn too).

I figure I may as well enter the fly-off time-trials too beside anything and strip the frame to a minimum the way they build F1 cars from carbon-fibre. The chassis of such cars, stripped of wheels, gear-box and engine is negligible and I intend my own airframe to be the same: the gross weight at lift-off will practically consist of me, motors, rotors and battery.

The frame at right is a fraction of the weight of that on left, which was only nineteen pounds anyhow. Nonetheless it is actually the more capable, swinging a 40-inch rotor in place of a 36-inch. When it comes to disk-area I'm a dog with a bone and this restores my thirty-five square feet and pops the disk-loading back beneath that of the Chinook.

For those intending to copy ~ and fill your boots ~ the flight-deck has been reduced to twelve by sixteen inches and the rotor axes are fixed at three inches from the spar-ends, which means that the motor housings (at six inches diameter) fit flush. The motor axes have been fixed at 30 inches from the centre-point of the pilot accommodation.

A design ponderable (in view of the renewed geometry of the flight-deck) was whether to maintain the rotors full-square or else distributed around a circular outline in a rectangular layout. I chose the latter, foreshortening two of the spars to under one metre. It sets the pilot centrally between the propellers, but sets them in a rectangular layout instead of a square.

This offset is easily overcome by (a) the pilot's brain or else (b) software, and from the outset the vehicle never advanced full-square anyway: in view of its layout it 'tracked' normal to the pilot, but tangentially to its planform.

Shall colour it in red this time to remind us it's destined to fly us around in phone-boxes.
at April 04, 2019 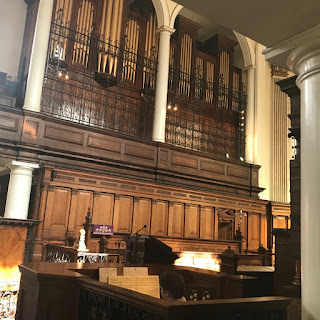 In Manchester recently where I witness a Bach recital. Am intrigued by the fact the console is wholly separate from the organ pipes, but am told by the organist that this is common with larger installations in cathedrals for instance.

The key strokes are thus relayed by to electro-pneumatic servos that operate the pipes.

In a way, that's what I'm doing with eVTOL, which is also a distributed power arrangement in which control motions are relayed to electrical units that effectively manipulate the air.

Interestingly the man at the keyboard says the very slight delay that this entails however as compared to mechanical linkages does affect the rendition of the piece.

Either way, Richard Bach would have liked the way that we're making music with eVTOL.
at April 04, 2019 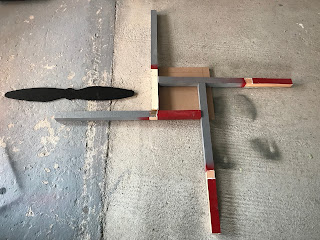 Project's in need of a re-boot.

I'll drop any pretensions of flying people around in a phone-box for the time being in favour of reducing the drones it would use at either end to the very minimum... and wearing one.

A significant reduction in the size of that central part which fits around the pilot will serve a dual purpose, in reducing weight whilst allowing for larger diameter rotors.

As ever, I mock this up on the floor in timber.

Plus for those who believe it's either (a) impossible or (b) a wind-up, I want it to look more absurd than ever.

It was Andy Warhol who said that if people hate what you're doing, you're on the right track.
at April 03, 2019

'That’s when we learned an important lesson: an ugly drone that can make transitions and fly is much better than a beautiful model that can’t take off.' Spinko says.

And a projection side-by-side with the reality proves the point. People forget that the first helicopters bore no resemblance to those of today, beside one main and one tail rotor.

Their own rotors have apparently been enlarged in line with a mentor's advice.

I need no such advice on this point, sizing propellers within the competition's confines being what keeps me awake at night.
at April 03, 2019

(a) failed to win any of the Phase Two prizes awarded by the GoFly Challenge;

(b) heard T-motor were sponsoring entrants but soon figured it was jam later;

(c) failed to get the mock-up listed in the Vertical Flight Society eVTOL guide;

(d) was on notice by the airline to say there was no way back to the flight-deck.

Presumably after catching sight of the outline, which many observers mistake for a joke.

Nonetheless, moving on I settle the power configuration as being the most powerful of the T-motor U-series, allied to 36-inch propellers.

In view of the square law there's a large sacrifice in disk-area to be made by giving up on 40-inch propellers, but there are two reasons for doing so:

(2) 36-inch propellers are more easily adapted to the current airframe.

They produce a disk-area of 28 square feet instead of 35, so that we lose twenty percent at one fell stroke.

Nonetheless I figure I can get airborne with an all-up-weight of 280 pounds, which happily fixes the rotor-loading target at 10 pounds per square foot.

Examining the chart above, this is four times worse than that of a Robinson R22, which only goes to prove why most helicopters sport a single rotor.

It is not too far adrift from a tandem helicopter in the form of the Chinook, however, and nearly three times better than the Osprey.

The moral of this story lies behind the figures: the R22 is the best-selling rotorcraft ever for moving people around whilst the Chinook is equally the proven best at shifting payload.

Least successful by far is the Osprey, and as you go further up the food-chain there seems to be a law against the commercial success of any VTOL with a higher disk-loading... and the inordinately expensive VTOL fighter-jets in development are already orders of magnitude over-budget.

Whether cars or aeroplanes, no-one ever lost their job over stacking them high and building them cheap.