Includes an edited version on my take on the eVTOL market as it stands, viz.

What electrification does for flight is to diversify the means of getting airborne, more than has ever been possible, in the way that nature fills every possible niche in the air.

Previously the most consistent attempt to apply multiple motors to flying machines in ways that are seen increasingly today was that of a Canadian working in California, in the shape of Paul Moller. He is largely overlooked by the current generation of entrepreneurs for the simple reason that his ideas were ahead of his time, and the electrical equipment available to experimenters today did not exist in the 1970s and 1980s.

In the way the Wright brothers pioneered flight only once the internal combustion engine had become viable, electrical VTOL only became possible when able to supplant that form of power in turn. Altogether simpler to distribute around airframes, the single (or twin) engines familiar to conventional aeroplanes and helicopters are being supplanted by any number of electrical motors driving fans or propellers ~ as few as eight though anywhere between eighteen and three dozen in the ‘flying taxis’ attracting current venture capital.

An analogy is computing, in which a single ‘calculating machine’ available to government and commercial offices would gradually be replaced by a computer on every site, then a PC on every desk and finally a smartphone in every pocket: a multiplication of means. In terms of the overall market for electrical aircraft there is likely to be a wider diversity of ‘phenotypes’ than those that evolved in the hydrocarbon economy, because of the ease with which lightweight and powerful motors can be distributed throughout both airframes and the global economy generally.

The costliest implementation of a means of VTOL for conventional types for instance was that to develop the Joint Strike Fighter (JSF) and not the least of the reasons which have led to the costliest overrun in aviation history is the previous complexity of vertical lift. In contrast, the great majority of ventures into electrical aviation take this ability as a given.

As a consequence, whilst the bulk of investment capital is aimed the soonest returns from multiple-occupancy eVTOLs and cargo drones, the ecosystem of electrical flight is rather broader altogether. This itself reflects the evolution of pre-existing technologies like the motor-car, which in the UK for example sprang from singular prototypes to a diversity of manufacturers numbering over two thousand… which would nonetheless be reduced to around a half-dozen as internal-combustion engines evolved toward their senescence.

This widening of development means that single-occupant or personal eVTOL has a place, although you might argue that single-seat rotorcraft almost literally never took off, while that the most numerous of helicopters is a two-seater in the shape of the Robinson R22. Nonetheless the R22 was premised on the basis that two seats would be considered the ideal from a practical and sociable point of view, not least because of the sizeable training market available to a type with seats for a student and instructor.

Previously the overriding issue against the success of single-seat types however was the fact they were practically as expensive to purchase, maintain and operate as larger types. This is wholly less likely to be the case with multicopters that already bestride a range of applications from aerial photographic types through industrial and agricultural drones and cargo-copters. The latter already raise payloads in excess of that required to transport an individual, and thus the ability to do so is a logical progression that fills a niche between uninhabited variants and multiple-occupancy types. It is well worth considering after all that in most economies charabancs and buses long preceded private-owned automobiles.

Our view therefore is that personal eVTOLs are a natural development of the environment already enjoyed by millions of drones in use worldwide. At the same time there has always been a vibrant kit-build market for aircraft from the beginnings of aviation ~ or what else could the Wright Flyer be considered? The key to continuing this tradition with electrical aircraft depends on manufacture and distribution as much as it does with aerodynamics.

From the outset ~ and of necessity ~ the TELEDRONE has therefore been designed for flat-pack assembly and modular means of operation which reduce the cost of ownership. It is also worth noting that birds were hopping or gliding long before they could fly… and it is no coincidence that eVTOLs have invariably been tested at low-level and over water.

Beside the market for individuals wanting access to their own personal ‘helicopter’ there is therefore an impetus for the replacement of traditional means such as boats, helicopters or hovercraft in a variety of roles, in ways that drones have largely supplanted rotorcraft. It is as ever a question as ever of walking before you can run, or of climbing ladders one rung at a time.

Need to leverage the extensive media I've accumulated in development, and as it's not worth re-inventing the wheel here's the Instagram account that will in due course be linked from the website: 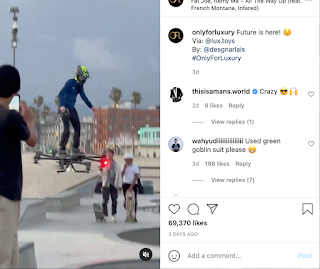 Been forwarded this recently on Instagram and figure it's a fairly recent manifestation, although with eVTOL and videos it's often hard to tell. The first recorded attempt to stand and effectively 'surf' a powered platform or airboard of this kind is attributed to a Canadian guy (and a lake, inevitably) and going back several years now.
But they do keep popping up, not least in Florida with Dragon's Airboard (which has the addition of ski-poles to hold onto). Either way you're pivoting the airframe around a fulcrum to tilt the array of propellers in the required direction, whether that fulcrum is a moveable part of the airframe itself or simply your ankles, which are equally able to flex.
It's tempting to follow suit, because the advantage these powered platforms have over drones is that the motors need not be constantly accelerated and decelerated by the flight controller that otherwise steers the craft, such that the batteries last for that much longer. Beside this, they are commendably compact in view of their flatness.
Tempting as it is however, I shall defer from the pursuit of an underslung outline of the kind because they could be classed as a dangerous (albeit exhilarating) sport. We looked yesterday at the broad division of eVTOL types and at the personal end of the scale like this they fall into two categories viz. weight-shifted and computer-controlled.
Ultimately they could be considered separate niches altogether, the one being a form of recreation per se and the other a more prosaic means of traveling from A to B. The reasons I prefer the latter in the longer term are multifarious:
Firstly, it's been done and there's nothing much extra that I could bring to the table.
Secondly, what intellectual property we've filed relates to a combination of drones pitched at different levels around an accommodation booth that may yet extend to the height of a telephone box (and hence the moniker).
Thirdly, digital control of vehicles cannot be uninvented and it seems a shame not to tale advantage of it along with every other form of transport.
Fourthly, I want a vehicle anyone can use from the get-go,
Fifthly, I'd like to be able to provide kit-builds that lend themselves to flat-packs, and the drone appearing in my last post is ideally adapted to these means.
Sixth, although there's eight propellers on the TELEDRONE too they are packaged in a modular design that allows the airframe to be readily disassembled for transport.
To prove this last point that photo of the 'DRONE in the last post took place in a studio, and to get there the upper quad occupied the roof-rack, the lower quad the flatbed of the trailer and the accommodation booth itself the trunk of the car.
Accordingly ~ and these projects are a long haul that require the dedication and re-dedication of an almost monastic pursuit ~ from hereon in expect the aforesaid design to be the goal of endless improvement and an ongoing program of 'proof-of-concept'.
at May 01, 2021