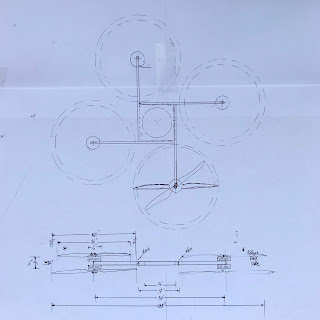 Never did like Technical Drawing classes at school, as you can tell.

Actually this is merely a draft to ping over to the graphical artist in Latvia, who will make it more legible to the millennials amongst us.

Always been a back of the napkin guy at heart, and a fan of Leonardo.

Research out of Cambridge this week indicates Da Vinci likely had ADHD and invariably quit one project for another... 'quit' being a relative term seeing how the Mona Lisa looked finished to me last time I saw it.

But it's good to know that the greatest mechanical genius the renaissance produced was a quitter... it's a comfort to us all in our old age. 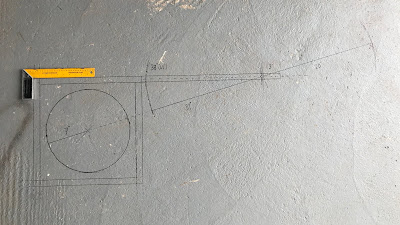 Looking at the previous post, attractive as the safer option appears, a review of performance data points to the benefit of larger rotors at this stage of the game.

The planform with double the number of rotors at a fraction of the size is ideally one for ducted fans of the sort provided by Trek Aerospace, but as they are fellow competitors in the GoFly challenge I don't see them falling over themselves to provide proprietary knowledge.

Besides which I've bust a gut on the 'wearable' drone to date. Almost literally.

Before cutting metal therefore I revisit the layout to see if it will swing a 40-inch propeller.

Seems it will. You can calculate the dimensions with ample use of Pythagoras Law, but for the safest I sketch it out on the workshop floor the way they chalked up sections of the Titanic in Belfast's shipyard.

Though that might not be the ideal comparison for something that's supposed to float on air.

Doable, so I shall draft a blueprint that should prove more acceptable to the FAA.

And these babies will lift thirty-five kilos apiece at a comparatively leisurely RPM.
at May 30, 2019

During a conflab with organisers of the GoFly challenge I suggest death and injury need not necessarily be precluded at the fly-off, bread and circuses being a staple since Roman times whether at the amphitheatre or the Daytona 500.

Sadly neither GoFly nor the FAA incline to this view, especially in view of the fact we are supposed to be designing for the future of urban air mobility.

This is not altogether a bad thing, for as someone said of hanging, it concentrates the mind.

Despite a long interregnum I feel the time has not been altogether wasted as it is essential for one thing that we field a marketable product, and for another it now behoves us to pin the final configuration down to specifics.

I thus return to two separate configurations that featured in the patent spec but which I am more than happy to share in order to advance the cause.

They each look like something from an Edward de Bono primer on psychology, so here goes: which provides the greater disk area given that on the left drives 36-inch propellers and that on the right 25-inch?

The answer is neither... they both total twenty-eight square feet.

The difference is that the configuration on the right is safer and more compact whilst that on the left is more efficient and flexible (as the ratio between the size of the propellers and the centre-deck is variable).

The market in a (litigious) USA errs toward safety however, and that's where I must err.

Ralph Nader made a name pursuing Porsche after the death of James Dean, yet Europeans were undaunted: I've flown airliners downwind alongside cars on autobahns going as fast.
at May 28, 2019 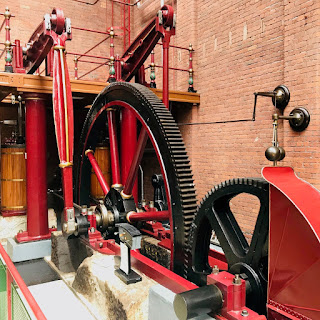 Holiday weekend in the UK and an effort to steer the progeny away from cars and soccer for just so long as it takes to review our local heritage. He didn't have a 'favourite' steam-engine, unlike his father, who quite liked the vee-twin... vees a feature of steam-engines long before they were fitted to motor vehicles.

This being at the Bolton Steam Museum, which fires up the coals on high days and holidays.

Lancashire gave birth to the Industrial Revolution because of cheap cotton from America, cheap labour locally and a damp climate that facilitated its spinning beside providing the power to drive the looms. Once water-wheels were supplanted by James Watt's steam engines, there was a plentiful supply of coal beneath those same hills that provided the watershed.

As a result, mill engines like the one seen above were put together in relative haste to meet the burgeoning demand. It is though to date to around 1840 and even then might be viewed as steam-power 2.0 in view of its compound cylinders.

Nice, but neither this nor the machinery it drove was something you'd want to be trapped in, and probably explains the popularity of bonnets.

One of which I might well sport when flying my wearable drone?
at May 27, 2019 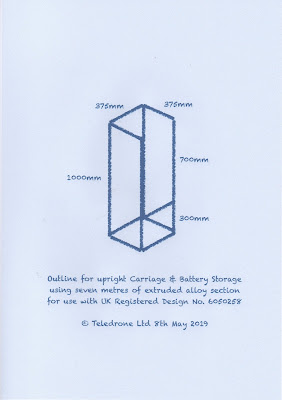 The target remains a wearable quadcopter that ideally can be steered by weight-shift ~ this being the simplest possible implementation of the various parts of the assembly.

Nonetheless these two outlines provide a means of supporting the weight of the airframe and batteries on the ground, and of the operator in flight in lieu of a crotch-strap.

Note that in either case the integrity of the 'drone' is preserved, its aperture still slipped around the waist and its bulk supported by shoulder-straps to leave the operator free to perambulate.

Difference is in this event said operator can step into the above frame (not unlike a Zimmer) and attach the flying section to this ground section prior to take-off... having connected the (greater) volume of batteries supported by the latter.

With the disclosure of two days ago, ditto excepting that the operator first dons the quadcopter and is afterward seated on the chair prior to attaching both it and the batteries supported beneath its seat.

Going forward then and given the current state of the art as regards electrical storage I envisage a short-duration flight wearing the drone itself and a limited battery-pack in the form of webbing, whilst the stand-up frame above allows for more batteries and a longer flight duration.

Finally the chair provides the greatest bulk for electrical storage and the longest flights.

There is of course a trade-off in so far as the frames themselves (at least in alloy instead of carbon fibre) might four or five kilos of extra weight, as do the larger batteries themselves.

Nonetheless this is a trade-off (fuel versus payload) that has existed since the dawn of flight.
at May 08, 2019 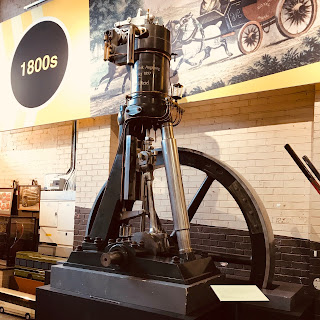 Realise that according to the contemporary commercial ethos grand developments are supposed to sacrifice the family to the greater good of progress, but at my age there's a different perspective and it being a holiday weekend there's a museum for us to visit.

The Commercial Vehicle Museum is situated in Leyland, in the county of Lancashire here in the UK. It was not just historically bound up with aircraft manufacture but with that of omnibuses, steam wagons and later diesel-powered lorries (or trucks).

In fact at some time, given it was grist to their mill, they acquired Rudolf Diesel's original prototype. It looks big, but current marine Diesel engines are altogether bigger. This unit, given its preponderance in moving the world's goods around on land and sea, has probably advanced the cause of globalism more than either war or words.

It was from a vessel on the English Channel that Diesel disappeared, never to be seen again.

He was thought to have suffered the same fate as the inventor of nylon (suicide), but there is a good deal of support nowadays for the suggestion that he might have been the victim of a nascent 'big oil' lobby. Reason simple: his engine could run on practically any combustible fluid and at the time he was supposed to have been promoting the use of vegetable oil. Or peanut oil, if memory serves.

I recall the earliest venture toward resurrecting EVs in California in the 1980s, which was comprehensively trashed by big oil. And fans of Netflix documentaries will know that anyone making any plausible attempt to derive energy from plain water in lieu of oil turns out to have been 'lost' or indirectly threatened in similar circumstances in both the UK and US.

The only way around this is (a) to make lots of money and (b) make a noise and therefore despite its best efforts, the same lobby has been unable to make much of an impact on the sainted Elon, who may come to be viewed as having done for electrical road and air vehicles what Diesel did for those on roads and sea.
at May 07, 2019 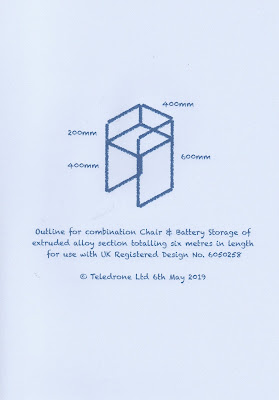 In designing eVTOLs we're about where they were when personal computers or gaming consoles were invented i.e. aggregating disparate parts and in our case to source, distribute and govern electrical power.

It is clear too that batteries are something of a moving target currently and that a broad brush is required for drafting electrical flying machines.

I have every confidence that a wearable eVTOL will in the fulness of time be useable with wearable power-packs, but for the time being we also need a fall-back.

This then an outline for a part to support both operator and batteries.

I'll mock it up in wood to my satisfaction and for your delectation.
at May 06, 2019 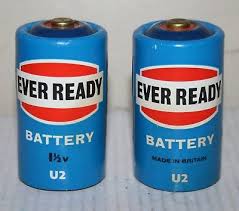 Been practically a month since I signed in but as ever, no project is as simple as it appears at the outset. As one of the webinistas put it: VTOL is hard. Specifically I've been grappling with the electrical side and it is becoming clear that batteries are the key.

These things used to be staid: I was brought up on cells like those pictured, the sort of brand that you suddenly ask yourself where ~ like Kodak ~ they disappeared to? Their background is similar... whilst Kodak stuck with silver for producing images, the UK's Ever Ready  company stuck with zinc for producing electricity.

They were eclipsed by Duracell's alkaline batteries, which promised altogether better performance. Ironically in the way Kodak had developed the digital camera and left it shelved, Ever Ready did the same with the alkaline cells they'd developed in the laboratory.

Much the same regime change is underway now, but at a vastly accelerated pace and with a step-change in energy content. Problem for developers is that the selection is bewildering and ~ like the nascent personal computer industry ~ batteries are loosely 'packaged' like the earliest computers that emerged from Silicon Valley. Accordingly, Tesla and Nissan are already on their second generation already.

Given all of this, after 'stepping away from the vehicle' for a period of reflection, I have an alteration to the prototype that involves packaging the batteries in a decidedly conservative way... the trick at this stage is, I feel, not to be too clever.