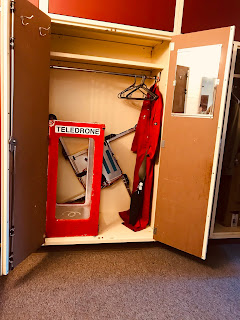 Probably the first helicopter to have fit the wardrobe at the NASA Ames facility.
at February 28, 2020 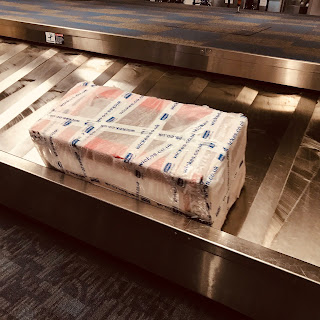 Blogging in retrospect here, as the jet lag does its worst, but here's the first helicopter to have been checked in as baggage arriving at San Fransisco.

Both the drone and the box arrived on schedule, despite transit stops at DUB and JFK between LHR and SFO. Missing were the undercarriage skids, bound as a bundle of spars, although that could be forgiven given their matt black finish and the fact that the latter legs of the flight were undertaken in the dead of night.

And even they turned up by courier a day or two later. 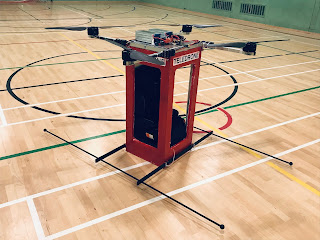 Felt like a pair of bank-robbers sneaking in here with the vehicle in three parts, and hoping we're not banned by the Parish Council. It's been twelve months too since  our attempt to fly it in scale-model form. At 25 kilos we're under the limit for FAA Part 107 drone operation and there's a theoretical 100 kilo's worth of thrust, or more than enough to elevate a small human being. Next stop San Fransisco: 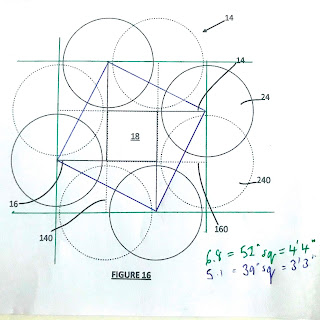 When a man is to hang in a fortnight ~ and not necessarily from a drone ~ it concentrates the mind. So said Samuel Johnson in eighteenth century London.

Back in twenty-first century London we have to figure out a way of persuading British Airways to let us carry a helicopter as checked-in baggage.

The more I look at this, along with the competition, I realise our USP has to focus on making the world's lightest, most compact and above all most practical means of vertical transport.

Which is why I am still drawn to the idea of a seat.

But looking farther afield (or upwards in fact) I have long struggled with what configuration to arrange the propellers in, and the more I peruse the matter the more I am drawn to the conventional X-8.

If only for reasons of packaging.

Looking at a drawing extracted from the WIPO specification, it is clear that either a quad or else a pair of identical quads stacked one upon the other will fit in a box around one metre square whilst the alternative octocopter layout requires one around 133 centimetres square.

Even my school mathematics suggests the octocopter requires a package one third larger.

And in a flat-packed world, every centimetre counts.

I Left My Art in San Fransisco 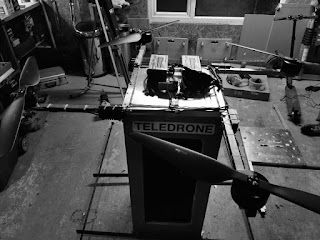 For the purposes of the GoFly challenge we're stripping the airframe down to fly as a quad, sneaking under the 25 kilo radar in order to operate it as a drone instead of a manned aircraft.

People, I feel, will still get the picture.

And it's on this day that I decide that when it is re-equipped with eight propellers then this has to be in the conventional X-8 configuration, which is (at cost of aerodynamic efficiency) the most compact.

You have to ask yourself what your USP is, and ours is this: no-one makes it more compact.
at February 17, 2020

Wind Beneath My Wings 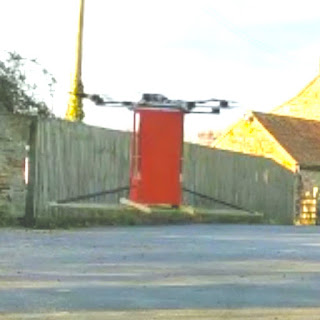 There's been a high-pressure system move over the UK in the past day or two and our head technician can't resist wheeling the Mark One out of the hangar for a spin. Red letter day as it's the first air we've seen beneath the phone-box. The good news too is that we're running an old set of batteries with only twelve cells at fifty percent thrust, and we've a new set to fit with fourteen.

Combined with this, the Mark Two airframe which I coincidentally finished today is around half the weight. It's still touch and go as to whether the drone will lift my weight, so last plate of fish and chips for me tomorrow evening!
at February 06, 2020 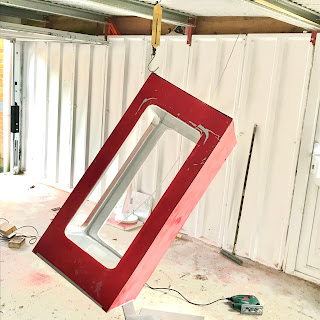 Well pleased with this update to the prototype as it's weighing in for the bout at eight kilos, or rather less than eighteen pounds. Scrolling back through the blog I see that this has halved the weight of the original... beside reducing its dimensions, improving its strength and looking more like a phone-box altogether.

There are designs which I've worked on that seem less credible once under development, and others that seem to keep on getting better.

And happily this is without doubt one that seems more credible with every passing week.
at February 02, 2020