A benefit of having taken part in the GoFly Challenge is having been teamed up with a pair of mentors, one in the US Army (with whom I've lost touch and regretfully did not get to meet due circumstances largely beyond our control) and another in the form of Walter: who invariably replies to emails with an informative and informed response.

He is of that generation having the time of day for people, and which we are sadly set to hear less from as our lives move inexorably online:

As regards our most recent test-flight too, here's what he had to say: Congratulations on a very nice video, showing excellent controllability and performance.

What I call a qualified opinion. 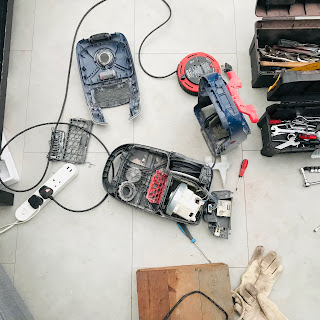 How many of those in the worlds of SPACs and flying taxis have to break off to get the vacuum working again?
Globalisation's the reason we're going to hell in a handcart, as it's as cheap to buy one assembled in China as it is to replace a motor from Germany. Miele's have made it symmetrically so, at £169 in each event.
And as a further effort to replace the fish in the sea with plastic, they've two more means: assembly with screws that nobody has a driver for, and snap-fit parts which work best in one direction only.
Happy ending though, only a blocked impeller. If you build drones, you can do a Miele!
The link I shall send to Miele UK themselves, who'll be sucking lemons come Monday.
at December 11, 2021

One Small Step for a Mannekin...

TELEDRONE successfully test-fly 66% scale quad aimed at Part 103 kit-build market in the US for general purpose use in ground-effect.

The airframe features the cantilevered layout featured by the team during the finals of the GoFly Challenge, set within a square outline that supports four motors and a set of skids.
The outline is designed for the addition of four more motors in X-8 configuration for higher level operation, with the company convinced that a market exists in substituting an extendable airframe for hovercraft, watercraft and ATVs.
Intended for a market launch in 2022, the 48” frame with five-kilowatt motors and 32” propellers will be used as the basis of a crowdfunding campaign to support the build of a 60” frame with ten-kilowatt motors to be test-flown at full-scale.
Subsequently a beta-product will be produced with a final selection of power-unit and propeller, to meet advance delivery orders.
Vehicle designer and company founder Colin Hilton commented: “Resonance is the issue with multicopters as they are scaled up, and we’ve achieved acceptable results without recourse to carbon-fiber and using commercial off-the-shelf methods that will ensure that aviation remains both safe and cost-effective. We’re looking at price-points below $50,000 but I’m ever ready to swallow my words…”.
The illustration features the same airframe with over-slung power-units, although the prototype and proposed beta-product will feature under-slung propellers separated from the pilot/operator by a protective grille.
The content of a press release aimed at the VFS. I don't send it any place else, for in this business you know who your friends are...
at December 08, 2021 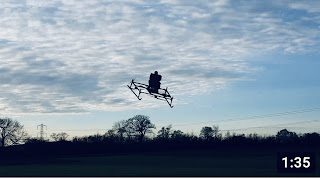 A year to the day since our outing to the test-facility at Llanbedr in North Wales, and a more promising outcome altogether. This footage among the best of flight sequences, with Angus Benson-Blair taking time out from aerial filming (and trials for the delivery of medical supplies by drone) to get our humble quad into the air:
https://youtu.be/HAIYGQ-CgQ8
at December 06, 2021

Wind Beneath Our Wings 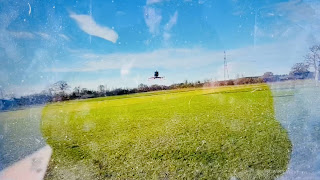 Airborne ahead of time, under both budget and twenty-five kilo:
https://youtu.be/dEvOYK2UKBY
at December 02, 2021