The early helicopter and radial piston engine were a meeting of minds. Unlike airplanes of the time, which required a crank-shaft lying prone driving a propeller, helicopters would need a drive-shaft in the perpendicular and the pancake outline of the radial engine was ideal for laying flat on the floor as can be seen here on the left in one of the earliest helicopters in the shape of the Bristol Sycamore; in fact it could be argued that the radial engine was a better fit in helicopters than in fixed-wing aircraft.
Nonetheless pitched around the centre of gravity it clearly occupied much of the space that might be given over instead to payload, and as a solution to this problem in another early helicopter in the form of the Wessex Whirlwind it occupied the nose instead, from where its drive-shaft passed between the two crew: with the benefit it took up less space altogether. And though it would add a deal of weight forward, this would be compensated by the rearward extension of that area given over to payload in the form of additional crew or passengers.
Looking at each installation however ~ and notwithstanding the gear-box at the top end beside a complex rotor-head and tail-rotor assembly ~ one can see how simple an electrical multi-copter is instead. Given an analogy I would say it is like comparing the movement of a conventional watch with the quartz oscillator and battery that more or less replaced it, except among those who wear unnecessarily complex watches by way of an investment or fashion statement.
Perhaps this is the fate of the conventional helicopter?
at January 30, 2022 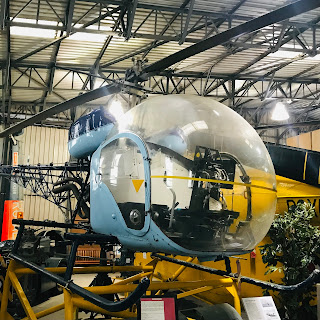 Used as a child to watch these things crop-spraying and making death-defying turns at either end of the field at tree-top height... Bell's inimitable 47. The plexiglass bubble that became its 'signature' was an early addition, at suggestion of someone familiar with the relatively recent introduction of plexiglas.
South Yorkshire Aircraft museum.
at January 29, 2022 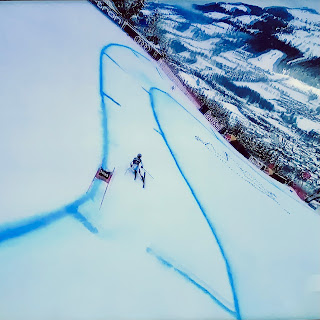 What is most remarkable about this footage is that unless otherwise enlightened we nowadays take it for granted, as with every other aerial shot featured in films or on TV.
From the outset aerial video was seen as a 'killer app' for drones that might otherwise serve few purposes beyond entertaining RC modellers traditionally viewed as geeky ~ whereas nowadays dramas and documentaries are regarded as incomplete without a sequence shot from above interwoven with those from ground-level.
And in the way that this has snuck upon us largely unnoticed over the past ten years or so, drones large enough to carry people are likely to reiterate the same evolutionary path.
Or will do if I have my way.
at January 25, 2022

For some people it stands for Visa Facilitation Service but for cognoscenti it's for the Vertical Flight Society and their database of practically six hundred separate projects around the world connected to electrical means of vertical flight. Between us we've called this latest outline the Mark V if only because I don't see another any time soon, what with it having ticked all my boxes the hard way.

It is actually listed as the Mark V (scale) as I don't want a proliferation of marques that would only confuse the public, if they not already confused enough by a dazzling array of projects worldwide. Once scaled up to adult proportions it will therefore be called the Mark V (beta) and thereafter and in fully-fledged form, simply the Mark V.

On one hand it's a naming convention I wish I'd thought of sooner, but on the other the V and IV marques of Spitfire were supposedly the best... so who's complaining?

As part of a crowdfunding campaign in 2022 set to enlarge the prototype to include an adult, the blog continues at medium.com where development to date is recounted, commencing here: