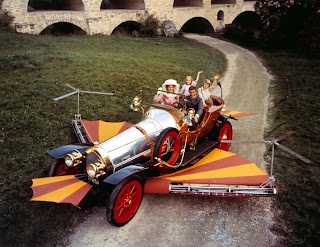 A report from McKinsey consultants points out that of the twenty billion dollars spent by airlines on flying taxis this year, a quarter represents options while the remainder include any number of opt-outs. Furthermore, practically none include a deposit. All of this on the cusp of an era when we're likely to be returned by the climate to the sort of city-states around which people could only walk, whenever they weren't sailing.
It happened before with tulips, except that to the best of my knowledge the tulips did actually exist, as opposed to appearing solely in CGI format. Here in the UK Vertical for instance built and crashed a prototype before realising that the easier way of raising investment is rendering an image at which they promise to throw money, so long as everyone else does... which they have.
Accordingly I've skipped even the CAD/CAM render in favour of borrowing one from the internet, to unveil it with some aplomb:
The revolutionary Chitt-E flying car comes with retractable airfoils supporting hand-crafted beech propellers to wisk you clear of the traffic jams caused by those queuing for petrol. It sports eco-friendly wooden-spoked wheels, and brightly-coloured doped canvas wings selected from a sweat-shop in India. Ample accommodation includes space for a pilot and co-pilot as well as three-row seating behind, and a jump-seat for observers. Bonnets are not provided, and deposits are offered for as little as a million dollars in cash.
at October 23, 2021 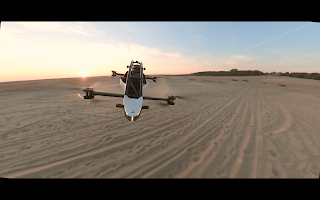 Price has been upped from $59,000 to $92,000 or so I'm told, and there's a reason it's flying at a height of around fifteen feet throughout (but a considerable feat in itself).
The only engine-out video I've seen for multicopters is DJI's for their octocopter, and it's what a helicopter pilot would call a controlled crash rather than a forced landing.
Nonetheless there are two factors at play that would suggest that it's an idea whose time has come (ref Victor Hugo):
One is the extraordinary reliability of the electrical components as proven by millions of hours of quadcopter drone operation against the failure rate.
Two is the fact that a prang in this (at that level and speed) is less likely to result in a fatality than a collision between motorcyclist and car-driver of the sort happening by hundreds and thousands on a daily basis.
And given the choice, which way would you rather die?
The personal air vehicle shown is the Jetson (singular).
at October 19, 2021 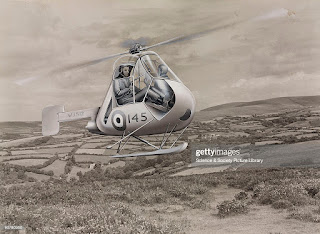 In the current edition of Vertiflite comes news of the restoration of a Fairey Ultralight in the form of G-AOUJ, as pursued with aplomb by the Helicopter Museum in Weston, a place that prefers to describe itself (like Hyacinth Bucket) as super-mare instead of on-sea.
It caught my eye for the fact it is the only helicopter I can recall that was steered by a cyclic stick dangling inside the cockpit from the rotor-head, as per most autogiros. It would eventually be reverted to hydraulic control in view of the physical force needed, and this is something of interest for developers of eVTOL types with an overhead array of propellers, as it suggests that it is a reasonable modus operandi and especially in view of the absence of the same gyroscopic inertia produced by a (single) main rotor.
In fact the Ultralight was designed to be fairly transportable and where it failed in that again as compared to eVTOLs was due the fact that its main-rotor dwarfed the length of the airframe, which meant that it still required a flat-bed truck. As a result it would lose out to the Scout and/or Wasp, proving rotorcraft of the last century never could never be as nearly portable as the multicopters of this.
Proprietor of the museum is Elfan Ap Rees, who sounds like a Welsh warlord from the pages of Shakespeare's Henry IV parts one and two. I wrote the museum prior to the competition in California to ask if they wanted what was left of our entry hanging from the ceiling. I received no reply, and so next time I shall write the organ-grinder in lieu of the monkey.
Thanks to GettyImages for the print, which I won't be paying for. it's the only picture I've seen of the Ultralight accommodating a passenger... who seems to be reading the instructions.
at October 17, 2021

Feel like my mojo died Sunday, and rose again three days later. As Marcel Proust said, however, the cure for depression is a decision and from henceforth I spurn the use of software and shall steer my nemesis by weight-shift. I went through RAF recruitment in Biggin Hill with Mark Hanna, the co-owner of the Old Flying Machine Company who died at a young age in an encounter with his own wake turbulence. But all I can recall of his subsequent career ~ he got in and I didn't, despite the better aptitude tests ~ is his refusing to contemplate fly-by-wire and sticking to the F-4 Phantom instead.

I failed I suspect for not preparing an answer to the question, "Are you prepared to kill someone?" and in retrospect I should maybe have practised on him. It was and still is a stupid question to ask an eighteen-year-old, and something you only know after the fact if those who've done to are to be believed.

Well I've taken the advice of individuals in the UK who earn a living programming large drones, and what I take from it is this: unless you've a deal of investment to throw at the problem as you scale up further, then the technology could be viewed as flaky. It's worth qualifying 'flaky', for that's flaky in the same way that the first home computers were. I'm old enough to have remembered their dawn, and there are distinct parallels.

Firstly, we are held to ransom by an elite of programmers in the same way that prior to the personal computer, we were at the behest of the geeks who were the only ones able to program and operate commercial mainframe and minicomputers.

Secondly, the current technology is both home-brewed and decidedly dodgy from the point of view of anyone who happens to have flown anything else. In summary, turning it off and on again is not an option at 10,000 feet.

Thirdly, it will get better to the point that chimpanzees like me can handle it. As I was told at the weekend, the Pixhawk flight controllers that I've had mixed (but mostly negative) experience with contain technology that a year or two ago may have cost £10,000 and a few years prior to that, nearer £50,000.

In other words, remember how PCs and printers were once shit, and how now (brown cow), phones and wifi devices actually work? Well the technology that makes survey and video drones reliable now, will make personal air vehicles so in the near future.

But I can't wait that long.

Meanwhile, watch the Netflix series on how Google stole the its 'Earth' concept from a company in recently liberated East Berlin. And learn how a company whose motto is "Do no evil"... does evil. It's inevitable as you scale, the added headcount falling short of the founders' vision. It's true whenever humans coalesce into something larger, the way that the Catholic Church (founder Jesus, who suffered little children) became a go-to career choice for paedophiles.

Then again, I'm writing this with on a Google platform and so as the Russians say, we are born in a clearing and die in a forest... 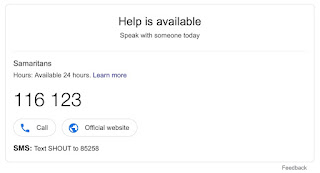 If ever there's a planetary conjunction featuring a Monday morning and projects not going to plan, it's probably the time I'm most likely to Google 'quickest way to end it all now'. Disappointingly for a search engine, it throws up 88 million reasons for not doing so, as if you'd entered 'Where can I buy a Mercedes' and have it return a million pizza parlours.
This is the guy ~ don't forget ~ who took a girl on a first date in London many years ago so as to see a film about Yukio Mishima committing Hara Kiri, a favourite method of the samurai wanting like the cherry-blossom to fall at the point of perfection. She fell asleep during though (the film and not our disembowelment).
There's not even a Dummy's Guide to Suicide out there, but I'd wager I'd make its best author. But given the option I imagine the guillotine is the means of choice. Luckily for most of us, however, we don't have one ready on a Monday morning. In the 21st century I guess the closest we get is the train (Avanti West Coast, Clean, quick and we won't even stop to pick up the pieces... ), although as Mr Clarkson suggested, it does rather inconvenience everyone else.
Turns out though that it wasn't even invented by the French, and that the British were already using it as a humane means of knocking off aristocratic criminals. Which itself begs the question of why you need to consider crime as an aristocrat... boredom? The only question is, I suppose, whether or not the likes of Charles the First remained conscious after the event, and for how long. Maybe they should have stuck a tube up his windpipe and asked him to sing There's no business like show business for as long as he was able, if only in the interests of scientific research?
But interestingly, the Korean director of Squid Game (where contestants with nothing to lose and everything to gain compete in playground games at the cost of elimination by death) said recently that ten years ago he couldn't interest anyone in so bizarre and morbid a notion. Now, in contrast, he says not only are there people queuing up to join in, but that much of the global population believe it is happening some place already. Where? On some James Bond island with an arena the size of Wembley, which no law enforcement agency is able to spot despite being able to detect a fart from space?
But it gets worse, for In twenty-one countries suicide is still punishable. What with? Death? Thus a remaining obstacle to the guillotine is the one our vicar used at school, which is needing to ask someone to press the button (or pull the lever, I imagine, given French Revolutionary tech).
I have an answer to that, in the form of the 'quantum guillotine" which like the cat in the box, is wholly whimsical. If said quantum is having a bad Monday, then so are you.
*Colin Hilton is not actively contemplating suicide but merely window-shopping, and he does not condone the use of quantum guillotines.
at October 11, 2021 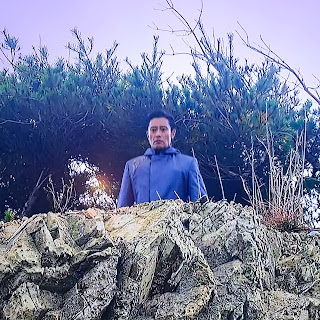 I can reveal that the mystery billionaire revelling in the wanton murder of desperate Koreans is no less than... Elon Musk!!!
at October 10, 2021