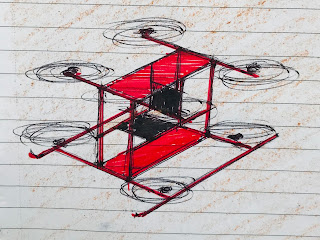 As the disaster that was 2020 concludes and a barely-improved 2021 barely is set to unfold, it's as good a time as any to reflect on the one and speculate on the possible during the other.
The GoFly challenge, good as it was, appears a bridge to far. If you've a project that's fully-funded, then there might be an argument to throw some tens of thousands of dollars in pursuit of the chance of a million. However the original X-prize (for reusable spacecraft) was pursued by experimental types which were broadly speaking one and the same as the eventual product.
Nonetheless the dimensions required for the GoFly challenge (that don't include those of the operator) do not work in favour of designs that include the operator within their outline.
In simple terms, this is like a motor-race whose height restriction disallows all but the drop-head version of each car despite the fact that sales of the saloon far outweigh it.
Given the time, energy and funding required, therefore, it would be better to devote the new year to pursuit of an airframe most likely to appeal to the broadest market, given all that we have learned over the previous two.
And this is more likely to look something like that above, but I'm not going to say why. The reason for this is that during that period when Volocopter was transformed from a flying yoga-ball to a saleable product, they voluntarily went into a form of lockdown.
What I will say is that it's not overly different from everything else I've put together in recent history, although I appreciate that every variation of the original theme is likely to fuel scepticism.
But if your'e sceptical ~ which is humankind's default setting ~ then remember this:
The first successful mass-produced car was Old's "Mobile" and it was one of eleven different prototypes. Arguably nowadays the most proven eVTOL out there (and still as far off certified flight as everything else) is the BlackFly, which is one of eleven models and coincidentally the result of eleven years of development.
Finally, if it has a competitor in terms of flight-time, then that would have to be the recently-retired Flyer program from Kitty Hawk. And this itself was the last of ONE HUNDRED AND eleven prototype builds. Which in turn is nothing... the vacuum-cleaner that made the UK's richest industrialist cost him five thousand experimental types.
None of this is known to the world at large, who imagine products to have dropped from the cloud fully-formed.
Blessed are the consumers, for they will inherent the Earth.
And as for me, should I die in 2021 then I die trying.
at December 31, 2020 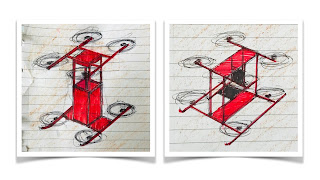 Been around IP for decades but here's a service I like that's designed for protection of designs like these two above. The website itself was put together in 2005 by a pair of web authors who were tiring of pitching work to clients that subsequently used the material by using other agencies to undercut the quote.
As we move into a new year however I have to leverage the versatility of the design by focusing on an upright model for a standing operator, or else a sedan including a seat.
Probably the best way to do this is to canvas the opinion of prospective purchasers, on condition they back that opinion with a cash deposit to confirm the preference.
Nothing focuses the mind like having to put your money where your mouth is...
at December 28, 2020 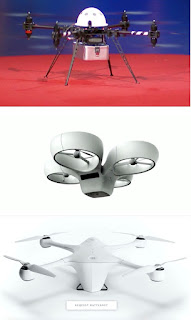 Another company based in Mountain View whose evolution is instructive for the likes of the fliterati like myself.
My first exposure to the possibilities of drones came some years ago on what I think was Christmas Day, during a break from operating an Airbus out of Funchal.
I wandered down to the harbour, where despite the stiff breeze a young Dutchman launched a DJI in order to film the panorama. Having spent half a lifetime managing engine failures in the simulator, I queried whether given any single failure, the drone would not fall from the sky?
He readily agreed it would, but suggested the injuries caused to whomever might be unlucky enough to be on the receiving end of the wreckage might as easily be killed or injured by any other happenstance in the modern world.
In an era when death by motor-car remains the method of choice for the reaper, he had a point.
As do matter.net and its investors, it seems, and belatedly I too feel they have a point.
Note their evolution from octocopter, through a ducted and finally an open-rotor quad? The aim is to manage risk rather than try to eliminate it altogether. This is because a 2:1 chance of saving life at the destination of this delivery drone outweighs the 2,000,000:1 chance of any injury to health enroute.
That said I would never trust my own life to a quad at altitude... but might to a pair of quads, either one of may either support me or else mitigate a forced landing
As a consequence, I still feel that the pursuit of a transportation booth powered by a quad on top and a quad below (like that in the prior post) remains wholly worthwhile.
And that's what I plan for 2021 ~ a year when the chance of death by Coronavirus far outweighs that by drone.
And on that note, Happy New Year!
at December 24, 2020 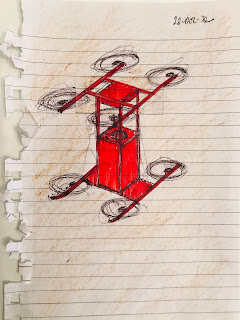 Been a year to forget, although the event in California was undoubtably the highlight.
Meanwhile the lesson learned from testing in Llanbedr is that ~ as always from the Wright Flyer onward ~ control is more of an issue than the power required for lift.
This though is solvable, like all else associated with flight has been (and ever will be).
Thus resolutions for 2021, at the cost of both sanity and bank account, are two-fold:
Firstly, freed from the constraints of the aforesaid event we are able to pursue the outline as originally conceived so as to house a standing operator.
Secondly, we need to make removable one of the drones so that it can be registered independently with regulators, and flown separately prior to attaching to the airframe.

In this way we can be assured to the best extent possible that flight will be stabilised, while at the same time enabling calibrations to be pursued altogether more easily.

Happily the prototype is readily adapted to such ends, as I've drafted here for my own benefit.

(And among suggestions from GoFly mentors was a preference for sketch over render).

Practice ~ meaning at full scale and in the real world ~ will in time make perfect. 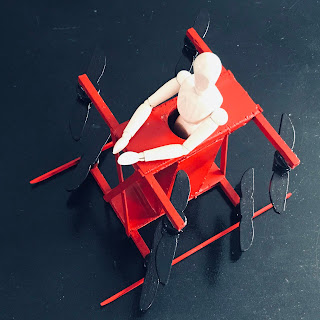 Makes for the perfect Christmas decoration I feel, albeit Santa's in his birthday suit?
It hangs in the lounge as a focus for my attention, the next phase of the project being a rebuild of the prototype in accordance with the lessons learned in Llanbedr.
at December 11, 2020 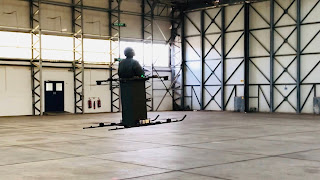 Every Which Way... Including Loose 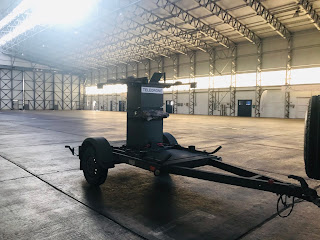 There's a point where you have to recognise you're going no further on your own, and so I load up the 'DRONE and ship out to a facility where we can examine this warning in the flight-control software regards an erroneous AHRS... which to non-technorati is an artificial horizon.
The solution is a reload of the firmware and re-calibration of the accelerometers and compass included within the flight-control module out front on the electronics tray.
I was hoping it wouldn't, but in fact this would involve holding it inverted, on its back, on its right side and on its left side in turn... whilst at the same time rotating it (and by 'it' I mean the entire machine) through 360 degrees. I wondered whether we'd to chant a Buddhist mantra at the same time, but apparently not.
This is not something we ever had to do with the Airbus, and if I get my way it's the one thing I would like to avoid doing ever again. A blessing therefore that the prototype is comparatively light, and set to get lighter still as I develop it.
From thence (and with its electronics protected by a supermarket bag) it was on to its temporary home, where shakedown testing awaits.
Shake that (albeit electrical) booty!
at December 03, 2020