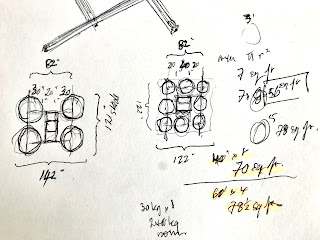 Kitchen table stuff, but if there's a better way to raise your backside into the air then I'd be pleased to hear it. Quads are a straightforward arrangement around a square while octocopters almost invariably string the disks out like a ring of roses. Admittedly there is no escaping the fact that propellers describe a circular path, but beyond that the world prefers square. And after that, ideally flat-packed.
So I run the numbers. Jetson at www.jetsonaero.com look closest to sales of a viable vehicle, and are running at around 84kW of installed power. However, their propellers are co-located, and contra-rotating props lose anywhere between 20% and 25% of their efficiency. This brings them level with Napkin Man's own target of eight motors at 8kW peak apiece.
(The only exception to this is the double-decker prototypes I have developed to date, which space a pair of quads around a vertical accommodation booth. Nonetheless in the hover and at zero airspeed, the lower quad is still operating in the wake of the upper. This is optimal for outlining the smallest possible footprint, but sub-optimal as viewed from aerodynamic efficiency.)
I contrast and compare with a straightforward quad, and by way of rule-of-thumb I've opted for 40" props on the Octo and 60" on the quad. These pan out at around the seventy and eighty square feet of disk-area respectively, but then the eight entrains a compact downdraft of air that ought to make up for the missing ten percent of thrust.
Furthermore, it can be shrouded such that the ground-effect cushion is optimised and at the same time provides a larger deck altogether with which to accommodate say a comfy chair: around 40" square as against 20".
And there's more. Upfront costs are broadly comparable (the smaller equipment often half the cost of the larger, so that the eight motors considered here are actually cheaper than the four larger motors otherwise required). Likewise maintenance costs are lower, the smaller propellers replaceable at a lower cost following the inevitable damage. In fact the only element likely to prove more expensive an outlay ~ and to an acceptable degree ~ are the speed controllers (ESCs).
Still it gets better. With the skids pitched 82" apart on each outline, the quad still has a larger overhang ~ 30" as against 20" either side. In practical terms this means that the octocopter's skids can be set upon lower legs, which in turn reduces the material costs beside the weight. It also ups the structural integrity, which again allows for a thinner gauge of aluminium tubing within the airframe.
Aviation invariably features virtuous circles of this kind, which inevitably come to be compromised somewhere along the line. Trick is to design for the lightest, smallest of designs at the outset. It's how automobiles started out, and what are we doing if not building vehicles in the air?
Finally, we estimated ~ my power supplier not working exclusively with aircraft ~ that we might get around 30 kilos of thrust apiece from each motor-and-rotor, providing a peak quarter metric ton of lift. It's at the margins of acceptability, but better to plan for the lowest possible outlay and work upward thereafter.
Nobody was born knowing how to walk. Actually I was, but I had better things to do.
at June 10, 2021