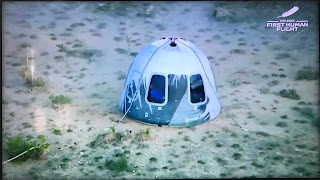 In fact Will Lighthorn (sic) who heads up the UK's space endeavour ~ a vanity project if ever there was one ~ says the billionaires are doing us a favour by dumping whatever needs to be dumped in space now that Earth is, like Will himself, full of shit.

This is madness, and something you'd hesitate to call civilisation: the remedy for shit on our door-step being to look for another planet to leave more on... or leave morons?

But the difference between the numbers interested in such ventures now, as against in 1969 when kids stayed up all night, is telling. Literally blink, and you've missed it... which is consolation if nothing else for anyone working in a warehouse instead.

(The views expressed here are not those of the author, but of the author after a glass of Pinot Grigio. He admires every billionaire's efforts to launch humanity into space, or indeed to offer the author a job in his warehouse if things get desperate.)