GoFly was and is the Boeing-sponsored competition that inspired any number of efforts around the world to design and build a compact form of personal air vehicle (PAV). The Vertical Flight Society recently summarised the ongoing progress of the twenty-one teams appearing at the fly-off in California in February of this year (2020), and for my own benefit if nothing else, I have condensed that further.

In view of the Coronavirus pandemic whose worst effects were starting to be realised around the same time, it is worth reviewing the prospects of those teams most invested in the competition, if only to take stock of the prospects for electrical flight in particular at the smallest scale.

Most of the investment around the globe has been concentrated to date upon the development of wholly larger 'flying taxis'. Nonetheless as can be seen from the interest in jet-pack technology ~ and as seen here, electrical forms of personal elevation ~ their may yet be a profitable niche lying between heavy drones on the one hand, and these multiple-occupancy types.

As seen in the previous post, it was single-seat step-through motorcycles that most democratised motorised forms of terrestrial mobility, and there is no reason to believe that single-seat types might not pioneer a similar path to the skies: 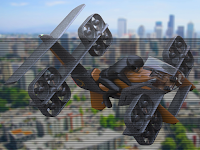 Aeroxo's AVIABIKE from Russia, with a base in Riga (a place I've been in connection with flight training). Their tilt-rotor industrial drone does pre-date their piloted project for the challenge, and from the website it appears this is where the current efforts are concentrated, if only by way of a faster route to market given a straightforward means of certification. This is a frequent path for even the best-invested firms to take, Volocopter themselves being recently side-tracked by a smaller cargo-carrying version. 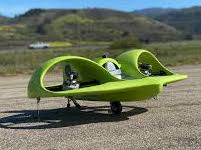 Canadian academic Gary Gress continues to test-fly his ATHENA scale models in preparation for transitional efforts into forward flight, having undertaken any number of hover-tests ~ which are always the easier, occupying as they do a smaller space altogether. Curiously the effort is incorporated just along the road from me in Preston in the UK, and had I known that sooner I'd be knocking on the door and chewing the vertical-take-off cud. 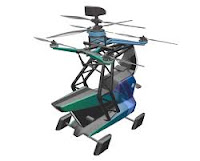 Another Canadian project from among the 'groves of academe', development of the latest prototype PKOK. This is an abbreviation of peacock apparently, which they might want to consider in view of the fact that the bird can barely fly. Though progress continues, albeit admittedly stalled to some extent by the effects of the Coronavirus and the inevitable delays associated with forms of government funding.

Dragonair's third AIRBOARD prototype warrants an extended entry all of its own beside the text of the VFS update, and I can see why. As they point out, they provide the bulk of video-footage of practical personal flyers, and without a website YouTube appears to be the principle platform. Behind the scenes there is interest from investors and invites to corporate events as they work to build three prototypes for the sort of campaign successfully pursued by the various jet-powered personal means of flight. 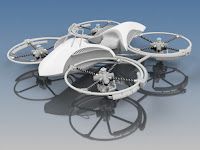 Another personal effort from a well-qualified Austrian entrant, the EDEA quadcopter is powered by hybrid units comprising a Wankel engine combined with four electrical motors (and there are four of these combination units powering the quad). This is therefore a complicated mission altogether, and unsurprisingly the project awaits further funding in the form of state-funded grant finance. In view of the travel it was the power-units that appeared in California in lieu of any prototype vehicle, I recall. 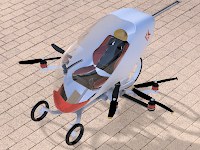 Nepal-based Garudeus (named after the oriental god of flight) continue work on their single-seat flying trike, and are based in California so far as the web presence is concerned, where they are allied with the M4 Engineering consultancy that provides paid-for prototyping and testing. The project itself is like so many others involved in the GoFly challenge in being led by a Singapore-based principle from among academic research quarters accompanied by a team of VTOL acolytes. Sounds like a cult, but isn't...

The Gyrobikers GYROPACK is an intriguing concept from a Spanish-based team, and therefore looks like a flying parasol. It is however a flying parasol with 'wiiings' as an unnamed investor stepped in at the end of 2019 to support ongoing efforts toward a prototype ~ a venture in which sizeable aviation group SAFRAN is apparently involved. This is unsurprising, as this (especially with its pneumatically-driven overhead fan) is no garage-project. 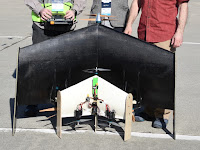 Team JAYU comprises a couple of young guys from MIT since working for companies involved in the broader technology, and there appears to be no further news regarding those sub-scale prototypes last flown ~ most successfully ~ at the GoFly event. It could be the project is proceeding under wraps (as did others like Volocopter, periodically), yet a less popular suggestion for the conspiracy-theorists might be that the founders got pre-occupied by the day job: especially given the pandemic's affect on every job. 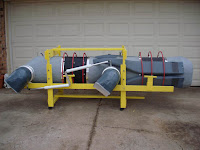 'Phattony' of flying-circus fame continues the development of his electrified Harrier VTOL jet, with flight-testing scheduled for the Spring of 2021. Whilst there is a website it would appear the bulk of the news of his progress stems from among Facebook pages. A decidedly ambitious quest, I do fear that while the power required is not beyond electrical means, the size of battery-packs may yet be, given the Harrier's efflux was nearly twenty times less efficient than that of a conventional helicopter's rotor-disk.

Whilst named after the world's lightest gas, the HELIUM project appears to have sunk without trace. Founded so far as I can tell from among student researches, it could be that the projectees have literally grown up and gone their separates, as the Facebook and Twitter feeds have been discontinued along with the website. Always a shame, although the concept itself is widely anticipated as here at https://www.youtube.com/watch?v=raVzAjMgLE8

The RAVEN stems from a guy in Georgia, who not only matches the typeface used here, but is among the most interesting places for a project to have sprung from. Impressed by the simplicity of his original project as it appeared at the challenge ~ an inflatable parawing powered by modest electrical motors above and below ~ I think he's mistaken in having scaled the notion up too soon. As a possible consequence he appears short of funding for the current. 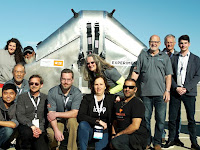 'Team rFlights' rWING appears to have continued to pursue a life of its own, although not necessarily in the more material form in which it appeared in California. An ambitious alloy airframe used together with a gasoline engine is something that the likes of Bell struggled with back in the X-plane era of the 1950s, which is why the project looks to have advanced only in digital form since. The team itself is sourced openly, and as such has worked on the Elon Musk hyper loop competition. Watch the space, don't hold breath. 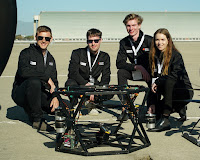 Another project to have succumbed to the passage of Old Father Time, the RMIT University team from Oz have since graduated, and with luck will be in gainful employment instead of throwing wads of Australian dollars at the kind of project that I know from experience always wants for more. Again, given the logistics, what they displayed at the event was anyhow a sub-system in the shape of co-axial propellers (not unlike my own in so far as they mount upon separate spars instead of a common). Good job, guys! 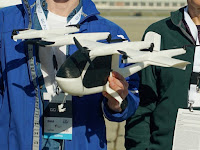 SCOOP was a father-and-son team who displayed a scale model at the fly-off, and very nice it looked too. Son is an aeronautical grad who seems to have debunked from South Carolina to Maryland where the eVTOL landscape is apparently greener. Aside from this there does not appear to be a great deal of news here, and perhaps this is unsurprising as the airframe itself, whilst decidedly comely, is doubtless an expensive piece of equipment to manufacture even in prototype form. 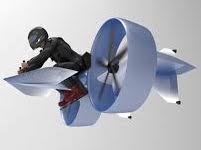 Another project that appears to be flourishing in digital form while not appearing to have gone beyond the considerable flight-testing success at half-scale evidenced prior to GoFly's challenge. That said, the team at least then comprised thirty students from Delft University, who between them gave the accommodation at NASA Ames a fraternity feel if nothing else. There website is also Sponsor Central, featuring as it does any number of global firms who are clearly a soft-touch when it comes to fresh-faced pleas. 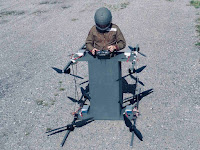 Am going to have to declare an interest, but team TELEDRONE as appeared in California is practically unchanged with the exception that the pilot had to be replaced due loss of interest. In fact as all of the above will doubtless share, sustaining interest in ventures such as these is that much harder than getting up to go to work at at someone else's behest ~ which is comfortable if on occasion the less satisfying. It's taken a long time to get it looking like this and wired as an octocopter, but it looks the more future-proof for it.

HARMONY Aeronautics has been spun off from the associated development at Texas A & M University and they are not wrong when they say the larger the rotor, the more efficient the power. As a consequence they appear to have trod the well-worn path of licensing a technology sprung from university to all-comers. This in fact is how technology related to MRI scanning and Monoclonal Antibodies (of such use under the current Coronavirus pandemic) saw the light of day in the UK. 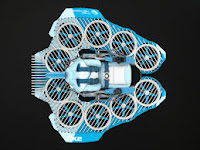 The great advantage these guys have is that they've a day-job that pays the bills whilst they develop such projects on the side as this. In fact this is among the reasons so many of those teams making the final cut at GoFly stemmed from university-funding, or else teams like this (or Dragonair with a water-sport background). No obvious progress as regards this iteration in particular, but as it is among those with the most solid foundation, it will doubtless be rising like a Phoenix post-Covid-19.

Close to our own hearts given the generous assistance afforded us at the February 2020 event, besides team JAYU, is the progress of Pete Bitar's VERTICYCLE. Seems from the website and recently-released video that more attention ~ as I did suggest myself ~ has been paid to completing the electric jet-pack. As a consequence of this there appear to be alternative uses for the ducted fans (like a link-up with RANS) as Trek Aerospace have long-since found. 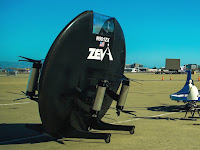 ZEVA's air vehicle suffered a setback when the manufacturers of their 25-kilowatt motors folded, requiring a re-equipment along with a doubling of the required voltage. I know from experience the time required for each re-iteration, though there is no further news on the resumption of flight-testing supposed to have taken place in July just gone. At the same time (and uniquely among so diverse a selection of teams) their efforts have been diverted into production of PPE to address shortages due to the pandemic.
In conclusion, while progress has been decidedly patchy, it would not be surprising in view of circumstance. It could also be that among the original 854 teams worldwide (else new entrants beside), more progress is being made elsewhere.
Notwithstanding flying-taxi firms fortunate to have benefitted from pre-pandemic investment, however, it remains the case that those designs that are most easily converted from prototype to beta-product are the ones most likely to stay the course.
For at the end of the day, you cannot beat the physics.
at November 09, 2020