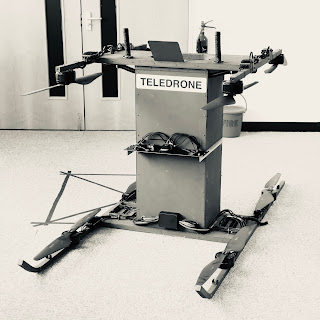 Dodging the showers I collect the prototype, whose avionics occupy the centre-section, power supply the lowermost drone and both GPS and compass feeds the upper.
Eventually I would like the drones working independently and yet in concert, a little like a duet. At present, wired (albeit beautifully) as they are, they are more like Siamese twins.
It would mean a hierarchical system of flight-control with separate processors top and bottom.

I'd a notion that the octopus has two brains (in fact it has nine) and wholly overlooked the fact that the average human has effectively two brains, albeit linked.

It's not a bad corollary for the logic of systemic redundancy however, as human beings thriving after the loss of one hemisphere of the brain are not unknown.

There's even a term for the deliberate removal of one half... hemispherectomy.