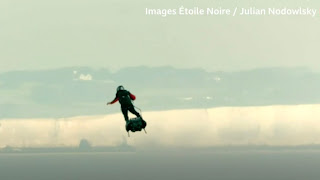 The great French novelist Marcel Proust tells in his masterpiece A La Recherche de Temps Perdu of how he was moved to tears whilst walking along the coast of Normandy by the sight of an aeroplane, then a form of transport in its infancy. Reporters tell a century on of how Franky Zapata was moved to tears after accomplishing this ~ the first crossing of the English Channel by a jet-powered personal air vehicle.

There is probably no more significant stretch of water in the world to establish historic feats of aviation. After the Wright Brothers first flew, it was on this side of the Atlantic between the efforts of Germany, Great Britain and above all France that the aeroplane saw the most rapid development. This was accompanied one hundred and ten years ago by Louis Bleriot being the first to pilot one across this twenty-two mile stretch of water.

So this changes everything, and were we to replicate the crossing by electrical rotorcraft we'd be standing on the shoulders of a giant in the shape of this man; for buried among the press reports came the revelation that he lost two fingers to a turbine while flying the prototype.

Which brings to mind Otto Lilienthal's final words, of how "Sacrifices have to be made."
at August 04, 2019